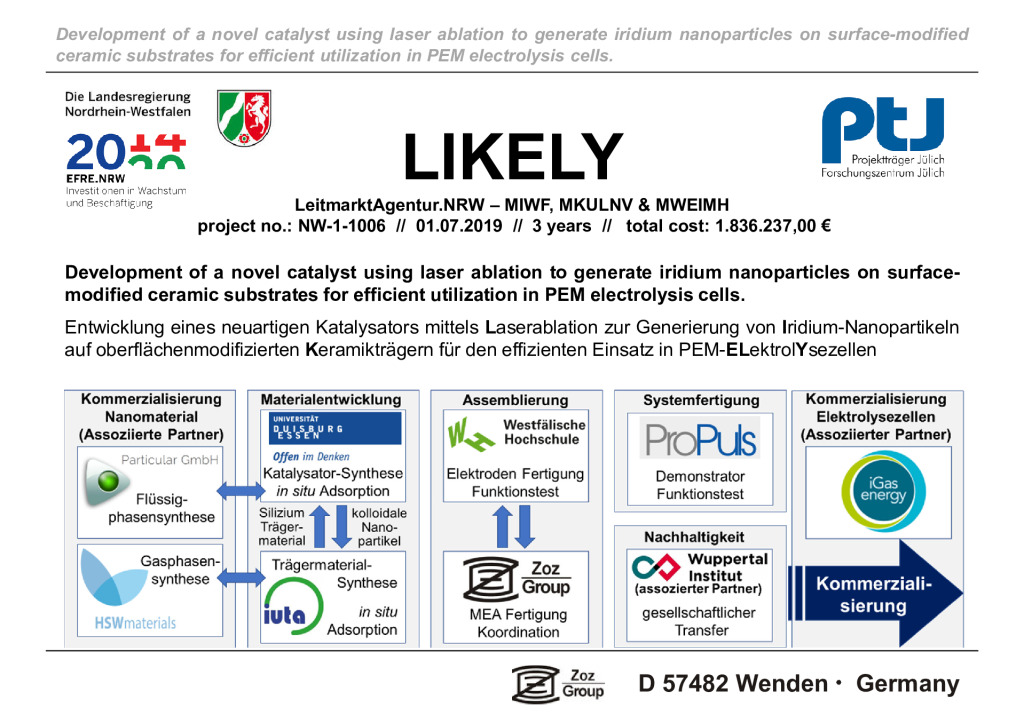 Development of a novel catalyst using laser ablation to generate iridium nanoparticles on surface-modified ceramic supports for efficient use in PEM electrolysis cells.

The societal task of transforming the energy sector to an energy economy based on renewable energy sources can only be solved by developing and utilizing suitable dynamic storage systems. In particular, the electrical supply from photovoltaic systems and wind turbines is highly volatile and surplus energy can only be absorbed by the electrical grid to a very limited extent. Currently, a peak capacity of about 80 GW of PV and wind power is installed in Germany, whereas the capacity of the installed pumped hydro storage power plants together amounts to about 7 GW. Due to the lack of storage capacities, downtimes of wind power plants of up to 50% of the possible utilization time already result today, since especially in sparsely populated areas with strongly developed wind farms (e.g., in Brandenburg) the generated electrical power cannot be tapped. Various studies assume that the peak power (PV and wind) in Germany will be expanded to several hundred gigawatts within the next 15 to 20 years, which at the same time proves the necessity of expanding efficient storage technologies. Hydrogen energy systems, in particular hydrogen production by electrolysis, therefore represent a key component for the long-term storage of energy from renewable sources.

In the project described here, new materials for the particularly promising technology of PEM water electrolysis are to be developed and investigated. The project work will focus on high-purity iridium catalysts, which will be applied to chlorine-free and surface-modified silicon particles and processed into nanostructured electrodes. The novel approach to produce noble metal nanoparticles by laser ablation method allows to achieve the decoration of silicon carrier particles from an iridium colloid by electrophoresis. It is expected that a hierarchical electrode architecture can be achieved as well as a much higher degree of utilization of the precious metal used, which will result in a significant reduction of the costs for this technology of water electrolysis.

In addition, this project aims to develop materials that can be validated on a laboratory scale in terms of cost benefits, efficiency improvements and long-term stability. For this purpose, the developed electrodes will be processed into technical cells and used in an optimized water electrolysis laboratory test system for in-situ investigations. In particular, the performance and stability are to be determined in a standardized long-term test in order to create confidence in the developed technology.

Posted in Allgemein.
Zoz GmbH is the core and the materials-company of Zoz Group and a small but global player in equipment and nanostructured materials manufacturing looking back on more than 20 years experience in this field.