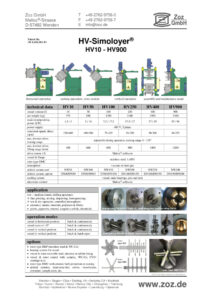 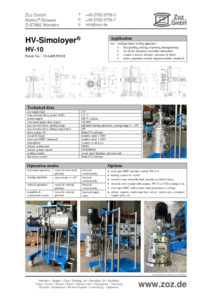 The HV-Simoloyer® are of significantly lower kinetic than the CM-Simoloyer®. The drive-power is about 8 times lower and pretty much corresponds to the since decades known attritors and similar machines, sometimes identical devices of other producers.

HV-Simoloyer® cover applications in the field of low- and medium-kinetic processing and can be operated in horizontal as well as in vertical mode. Furthermore the grinding chamber can be turned 45 degrees over the vertical position. This can be done controlled during processing so that e.g. by means of cyclic turning +/- 45 degrees around the vertical axis. With this option, highly sensitive metal-flakes like platinum, silver or tantalum may be produced successfully as the problematic sinking effect of these materials during common vertical processing (dead zone due to gravity) can be compensated.

The HV-systems are designed correspondingly to the CM-Simoloyer® so that all peripheral accessories in particular airlock-systems, containers and aerodynamic-flow-systems for sealing and /or semi-continuously processing can be utilized in horizontal as well as in vertical operation mode. That is why the HV-Simoloyer® can be used without any problems under inert-gas, vacuum or closed fluid system which includes next to processing also charging and discharging of the product.

The at least 3 drives of the HV-Simoloyer® fully communicate by means of the MALTOZ®-software, thus the highest degree of automation is given.

The original motivation for designing the HV-Simoloyer® has been insofar a fully reaction on the market in that there are considerable and apparent insuperable doubts on the part of the users to apply a new production route or principle for long term introduced and existing products, even under demonstrated considerable improvement of economically feasibility of products. In particular there are considerations that the changing from a vertically processing principle to a horizontally processing principle might have negative long-term-effects on the product. This barrier had to be noticed in particular difficult in case of producers of paint-pigments for automotive paint industry (long-term-stability of pigments) as well as e.g. the manufacturer of conductive pastes for computer-industry.

Corresponding to this, a new system had to be developed that can build a bridge between the common, somehow historical equipment and modern Simoloyer®-technology.